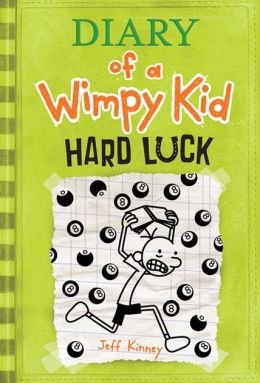 The Wimpy Kid is back! In the most hotly-anticipated children's book release of the year, the hilarious, globally-bestselling and award-winning Diary of a Wimpy Kid series, sees BOOK 8 hit our shelves this November!

Greg Heffley's on a losing streak. His best friend, Rowley Jefferson, has ditched him, and finding new friends in middle school is proving to be a tough task. To change his fortunes, Greg decides to take a leap of faith and turn his decisions over to chance. Will a roll of the dice turn things around, or is Greg's life destined to be just another hard-luck story?

Perfect for readers of 8+ and also reluctant readers. You can also discover Greg on the big screen in any one of the three Wimpy Kid Movie box office smashes.

As well as being the international bestselling author of Diary of a Wimpy Kid, Jeff Kinney is also an online developer and designer. He is the creator of the children's virtual world, Poptropica. Jeff has been named one of TIME magazine's most influential people in the world. His original Diary of a Wimpy Kid was voted 'Best Children's Book of the Last 10 Years' by UK readers. Jeff lives with his family in Massachusetts, USA.

Diary of a Wimpy Kid: Double Down

Diary of a Wimpy Kid: The Getaway

Love Hate And Other Filters