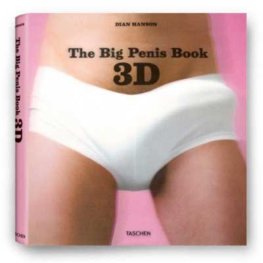 It’s hard to imagine a book that could beat The Big Penis Book for grabbing attention and driving sales, unless it would be those same unimaginably colossal generative units seen in breathtaking 3D. That pop-up centerfold we joked about adding? In 3D every page becomes a pop-up! This 220-page, 30 by 30 cm special edition includes 96 images from the original book, plus 8 new bonus photos, transformed into eye-popping 3-D by Jon Schnitzer and The Brain Factory, the geniuses whipping up special effects for filmmakers such as Tim Burton. There is a revised introduction, new layout, and a pair of red/blue anaglyph glasses included.

Unlike other 3D pictures you may have seen, the photos in The Big Penis Book 3D do not look distorted when viewed without the glasses. The Brain Factory’s technique is so subtle it’s hard to even detect the red/blue tint in many of the black and white photos, but when you put on your glasses the parts of interest leap from the page, not in flat layers as in old-style 3D, but as thick, fully rounded, touchable contours.

That this is a red-hot gift book is a no-brainer. From the dawn of 3D technology, spears, sticks, guns, and rockets have been aimed at the audience to demonstrate the realism of the effect. The special effects in The Big Penis Book 3D are no less convincing.