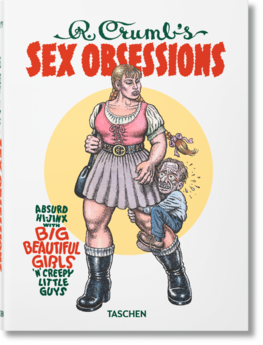 Robert Crumb, Dian Hanson
24,95 €
Na sklade
From the very beginning, even before the sexual revolution made Robert Crumb the world’s most celebrated underground cartoonist, he felt compelled to commit his sexual fantasies to paper. Once upon a time, he’d destroy them, fearful of others discovering his quirky tastes. Then he found that baring his soul provided a sort of therapy, and since has memorialized every desire.

Crumb’s personal selection of these works first appeared in 2007 in a gorgeous, but pricey, TASCHEN Collector’s Edition, complete with slipcase, lithographic print, and many strips hand colored by Crumb himself. Now, we bring you the compact edition, offering the samehigh quality obsession at a bargain price!

This compendium includes the strips My Troubles With Women, If I Were a King,A Bitchin’ Bod, and How To Have Fun With a Strong Girl, as well as 60 single page drawings. Recurring motifs include big strong girls, artistic wimps triumphantly subduing said girls, cavewomen, Yetis, vulture demonesses, bitter little guys, and did we mention big strong girls?

Dian Hanson produced a variety of men’s magazines from 1976 to 2001, including Juggs,Outlaw Biker and Leg Show, before becoming TASCHEN’s Sexy Book editor. Her 60+ books for TASCHEN include The Art of Pin-up and Psychedelic Sex. She lives in Los Angeles.

Eric Stanton. The Dominant Wives and Other Stories