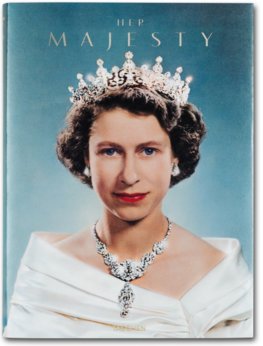 In honor of the Queen’s Diamond Jubilee—60 years on the throne—TASCHEN celebrates the extraordinary private and public life of Her Majesty. Born in 1926, married in 1947, crowned as Queen in 1953, for over six decades she has steadfastly and loyally carried out her duty on behalf of her country, never speaking out of turn or putting a foot wrong. The book tells her remarkable royal story through hundreds of stunning photographs, many previously unseen and sourced from multiple archives in the United Kingdom (including the Royal Collection), Continental Europe, and the United States. These images have it all: history, politics, glamour, fashion, culture, travel, and, of course, hats.

As the Queen, she has endlessly traveled the globe, been introduced to every leading icon of the 20th century, including the Beatles, Marilyn Monroe, and JFK, attended thousands of receptions and state functions; while concurrently being a mother to four children under the constant glare of public scrutiny. These photographs cover every aspect of her reign: the early years, coming of age during World War II, becoming a wife, Queen and mother, the Royal Tours, the palaces, the crowds, the weddings, the Royal Family, the Silver Jubilee in 1977, and the later years. God save her indeed!