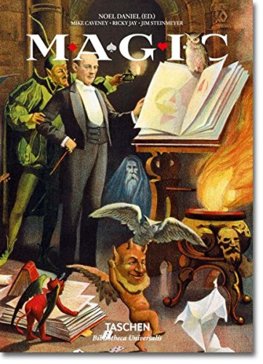 Special effects: A visual history of magic, from the Middle Ages to modernity

Magic has captivated humankind for millennia. Whether invoking spirits, reading minds, or inverting the laws of nature, the magician’s hand has evoked terror, laughter, shock, and amazement. Long before science fiction, virtual realities, video games and the Internet, magic was the ultimate world of fantasy and possibility.

This book celebrates more than 500 years of the visual culture of magic. Through vintage posters, photographs, handbills, and engravings as well as paintings by the likes of Hieronymus Bosch and Caravaggio among others, it traces the history and representation of magic as a performing art from medieval street performers to masters of twentieth century vaudeville.

About the series:
Bibliotheca Universalis— Compact cultural companions celebrating the eclectic TASCHEN universe at an unbeatable, democratic price!
Since we started our work as cultural archaeologists in 1980, the name TASCHEN has become synonymous with accessible, open-minded publishing. Bibliotheca Universalis brings together nearly 100 of our all-time favorite titles in a neat new format so you can curate your own affordable library of art, anthropology, and aphrodisia.
Bookworm’s delight — never bore, always excite!

From Cold War to Hot Peace