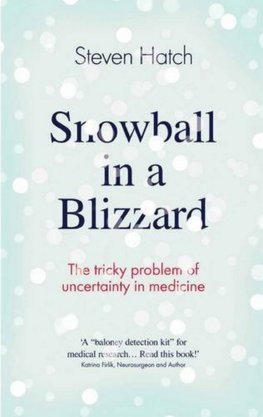 Snowball in a Blizzard

There's a running joke among radiologists: finding a possible tumour in a mammogram, they say, is akin to finding a snowball in a blizzard. The result? Up to 30% of breast cancer surgeries are done on those who have no cancer at all. In this landmark book, medical professor Steven Hatch reveals that although modern medicine has reached new levels of scientific prowess, we know far less than we think we do. Indeed, CAT scans, MRIs, Mammograms, and blood tests provide a wall of data where false positives are rife. Thus, to be a good doctor, surgeon, or psychiatrist, it is just as important to know what one doesn't know, as what one does. Covering everything from the efficacy of Prozac to the regular barrage of health advice by the media (e.g. bacon causing cancer), Hatch shows why it's essential that doctors and their patients know how to interpret data. A drug that might be very effective to a certain cohort of patients suddenly becomes little more than a placebo when given to large bodies of the population (think Statins). A prognosis of 10 years to live might be accurate on average but mean nothing for the individual cancer patient. Filled with the kind of revelations about flawed human reasoning that made Daniel Kahneman's Thinking Fast and Slow a bestseller, this is the must-read medical book for 2016.

The Ends of the World Volcanic Apocalypses, Lethal Oceans and Our Quest to Understand Earth’s Past Mass Extinctions

In Praise of Walking

The Glass Universe: The Hidden History Of The Women Who Took The Measure Of The Stars