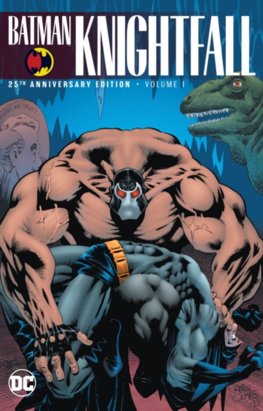 The epic story that saw Batman dismantled at the hands of one of his greatest enemies, Bane, begins here in this new 25th Anniversary edition! Continued from BATMAN: PRELUDE TO KNIGHTFALL, this volume also contains never collected before material! The inmates of Arkham Asylum have broken free, and Batman must push himself to the limit to re -apprehend the Joker, Poison Ivy, the Riddler, Killer Croc, and more. Pushed to the limits, he comes face-to-face against the monstrosity known as Bane, who delivers a crippling blow destined to change the Caped Crusader forever! Part of a massive 25th anniversary re-cut of the entire BATMAN: KNIGHTFALL saga, this graphic novel collects BATMAN #492-497, DETECTIVE COMICS #659-663, and BATMAN: VILLAINS SECRET FILES AND ORIGINS #1.

Guardians Of The Galaxy By Jim Valentino Omnibus

Vertigo: A Celebration Of 25 Years