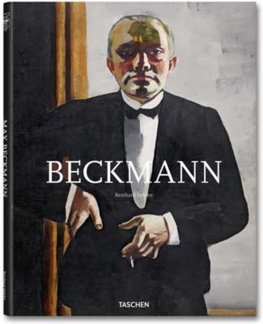 Max Beckmann (1884-1950) found his central theme in the loneliness of the twentieth century man, threatened by catastrophe and torn between materialism and freedom of mind and spirit. His early pictures showed the influence of Impressionism, with a preponderance of biblical, historical, and allegorical themes. World War I made a deep impression on him: somewhere between Expressionism and Neue Sachlichkeit (New Objectivity), the succinct forms and hard contours in his memorable paintings and graphic works showed man at the limit of physical and mental endurance. Later, the harshness and severity of his style softened and his colors became more radiant, but the monumentality remained. Theater, circus, and music hall became parables of human existence.

Beckmann's work is concerned with the fundamental conditions of human existence and the tragic entanglement of the human being dependant on the whims of gods, sexuality, and society. His relentless search for knowledge, his uncompromising commitment to the picture, and his belief in the power of its form and color give his work its distinctive, fascinating character, and have earned him a high-ranking place among the artists of the twentieth century.

This monograph features more than 180 images of works from 1907 to 1950, including many of Beckmann's famous self-portraits and triptychs (such asTemptation of 1936/1937). Biographical essays cover his war years, the twenties in Frankfurt, his exile years in Amsterdam, and his emigration to the United States where he died; additional material includes photographs on which many of his paintings are based, several exhibition shots, and images from other artists as Pablo Picasso, Eugène Delacroix, Max Ernst, and Edvard Munch that visualize Beckmann's inspirations and context.