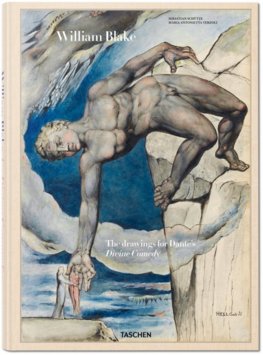 Sebastian Schütze, Maria Antonietta Terzoli
135,00 €
Na sklade
Celebrated around the world as a literary monument, The Divine Comedy, completed in 1321 and written by Dante Alighieri (1265–1321) is widely considered the greatest work ever composed in the Italian language. The epic poem describes Dante's journey through Hell, Purgatory, and Heaven, representing, on a deeper level, the soul's path towards salvation.

In the last few years of his life, Romantic poet and artist William Blake (1757–1827) produced 102 illustrations for Dante’s masterwork, from pencil sketches to finished watercolors. Like Dante's sweeping poem, Blake's drawings range from scenes of infernal suffering to celestial light, from horrifying human disfigurement to the perfection of physical form. While faithful to the text, Blake also brought his own perspective to some of Dante's central themes.

Today, Blake’s illustrations, left in various stages of completion at the time of his death, are dispersed among seven different institutions. This TASCHEN edition brings these works together again, alongside key excerpts from Dante's masterpiece. Two introductory essays consider Dante and Blake, as well as other major artists who have been inspired by The Divine Comedy, including Sandro Botticelli, Michelangelo, Eugène Delacroix, Gustave Doré and Auguste Rodin.

With a close reading of Blake’s illustrations, and 14 fold-out spreads to allow the most delicate of details to dazzle, this is a breathtaking encounter withtwo of the finest artistic talents in history, as well as with such universal themes as love, guilt, punishment, revenge, and redemption.
The authors:
Sebastian Schütze was a longtime research fellow at the Bibliotheca Hertziana (Max Planck Institute for Art History) in Rome. He is a member of the academic board of the Istituto Italiano per gli Studi Filosofici in Naples, and a corresponding member of the Österreichische Akademie der Wissenschaften. From 2003 to 2009 he held the Bader Chair in Southern Baroque Art at Queen’s University in Kingston. In 2009 he was appointed Professor of Early Modern Art History at Vienna University.

After studying in Pavia, Bologna and Geneva, Maria Antonietta Terzoli taught at the universities of Geneva and Zurich. Since 1991 she has been a professor at the University of Basel, where she is head of the department of Italian Studies. A philologist and interpreter of literary text, she specializes in Italian literature.

That Time I Got Reincarnated as a Slime 1