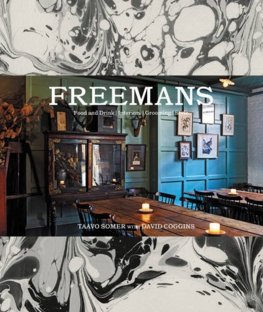 In this lavish full-color volume featuring 225 photographs, Taavo Somer, the creative mind behind Freemans, the iconic New York City restaurant, barber, menswear shop, and bespoke tailor, reveals the creative process behind the development and design of the "rustic-luxe" and holistic approach of this cultural phenomenon and pioneering brand.

Nestled in a secluded alleyway off Rivington Street on Manhattan’s Lower East Side, Freemans Restaurant is an oasis of calm, beauty, and exquisite food in a crowded, chaotic city. Founded by Somer—one of the defining figures in the New York social and design culture for more than a decade—this one-of-a-kind eatery with rustic décor has redefined New York dining since its opening in 2004. A dozen years later, Somer’s vision has extended to other eateries and bars such as his restaurant, ISA, in Williamsburg, which references 1970s California, and the Rusty Knot, a nautical-themed dive bar in the West Village, as well as a men’s clothing line and bespoke tailoring services, a barbershop model that has been emulated the world over, and an organic approach to interior design that speaks to the soul.

Somer was the first to establish the now popular "lumberjack chic" style; the interior of his bars and restaurants—with furnishings handcrafted by the designer in his unique, signature style—harken back to the beauty and simplicity of more rustic times. Now, in his first book, Somer opens the doors to the Freemans world. With an elegant, sumptuous design and dozens of color photographs shot specifically for the book, Freemans showcases the interiors of his numerous Freemans ventures, other restaurant spaces he’s conceived and owns, as well as the classic, superbly tailored American-made men’s clothing, bespoke suits, barbershop, and food and drink that comprise Somer’s iconic—and now much-copied—style.

Somer reveals the inspiration behind Freemans—including the restaurant down the alley, acclaimed menswear store Freemans Sporting Club, and the pioneering Freemans Sporting Club Barbershop—sharing the story of his evolution as an architect, designer, and tastemaker, from his rural Pennsylvania childhood to his architectural apprenticeship in Minneapolis to his arrival in New York, where at first he designed t-shirts and threw parties in a Financial District strip club. Freemans also takes fans into the nineteenth-century farmhouse in upstate New York he renovated and landscaped, inside his restaurant ISA, and bar the Rusty Knot, and across the world to the Freemans Sporting Club store in Tokyo, the remarkable four-story townhouse he designed, which has rarely been seen by an American audience.

A comprehensive exploration of Somer’s singular vision, Freemans will appeal to the many devotees of the Freemans world, as well as lovers of fine living through its exploration of design, dining, architecture, gardens, and men’s fashion.