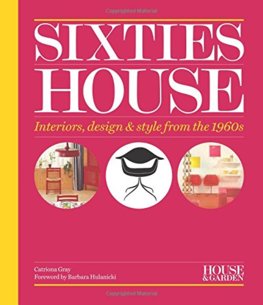 From Pop art to Op art, plastic furniture to bubble-gum paint colours, the Sixties saw a new wave of interior design that was closely linked to popular culture and fashion, becoming increasingly youth-oriented and playful to appeal to the new generation of baby-boomers.

In Sixties House, mid-century modern enthusiast Catriona Gray has drawn on the magazine's peerless archive, curating the best illustrations and photographs to show how the use of colour, pattern, homewares and furniture evolved through the decade. The homes of key tastemakers are featured including Bridget Riley, Mary Quant, David Mlinaric, Barbara Hulanicki of Biba and David Bailey.

The second title in the new Decades of Design series, House & Garden Sixties House is required reading for mid-century modern enthusiasts, collectors and decorators in search of inspiration from the most influential homes of the past.