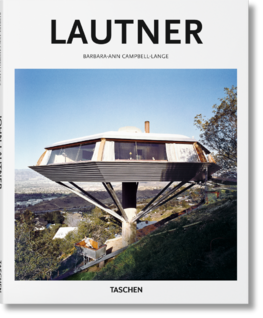 Michigan-born architect John Lautner (1911–1994) was behind some of the most striking and innovative architectural designs in mid-20th-century America. With designs for homes and commercial buildings primarily in Southern California, Lautner’s innovative work captured the pioneering optimism of 1950s America, a time of space-age technology, economic growth, and affluence. Today, several of Lautner’s houses are labeled Los Angeles Historic-Cultural Monuments.

Lautner’s projects focused on the relationship between humans, space, and nature. He was always particularly sensitive to the surrounding environment and would often integrate water and natural landscapes into his designs. His houses are characterized by sweeping rooflines, glass-paneled walls, and steel beams, in a heady combination of fantasy and minimalism. Eschewing architectural orthodoxies, Lautner emphasized geometric shapes such as circles and triangles, incorporating myriad technological innovations.

Ingenious uses of modern building materials such as concrete allowed him to blend his structures into unique locations in the Californian landscape, perching his sci-fi structures on hillsides, beaches, and deserts. Residences in the Los Angeles area, including the “Chemosphere” and the “Silvertop,” boast panoramic views and still exude an almost otherworldly magnetism.

In this new Basic Art guide, we take you into the heart of Lautner’s idiosyncratic practice, discover his manifold influences and ideas, and survey the resulting gems of modern architecture.