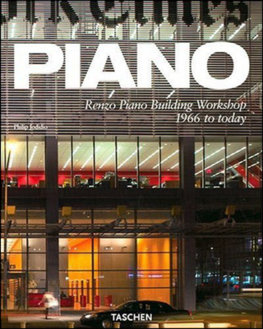 "The array of buildings by Renzo Piano is staggering in scope and comprehensive in the diversity of scale, material, and form. He is truly an architect whose sensibilities represent the widest range of this and earlier centuries." Such was the description of Renzo Piano given by the Pritzker Prize jury citation as they bestowed the prestigious award on him in 1998.Whereas some architects have a signature style, what sets Piano apart is that he seeks simply to apply a coherent set of ideas to new projects in extraordinarily different ways. "One of the great beauties of architecture is that each time, it is like life starting all over again," Piano says. "Like a movie director doing a love story, a Western, or a murder mystery, a new world confronts an architect with each project." This explains why it takes more than a superficial glance to recognize Piano's fingerprints on such varied projects as the Pompidou Center in Paris (1971–77), the Kansai airport in Osaka, Japan (1990–94), and the Tjibaou Cultural Center in Nouméa, New Caledonia (1993–98). This stunning monograph, illustrated by photographs, sketches, and plans, covers Piano's career to date.

The updated publication includes new photographs of projects completed since the previous edition, such as his The New York Times Building in New York, the Zentrum Paul Klee in Bern, Switzerland, The Morgan Library in New York, as well as some sneak peeks at his current projects, including the 66-story London Bridge Tower, which is set to be Europe's tallest building.

Homes for our times

Where Architects Stay in Europe