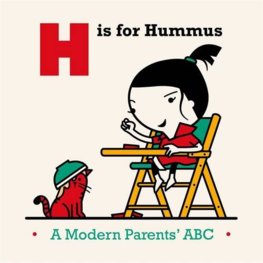 H is for Hummus

A is for Apple, B is for Bear, C is for Cat... Z is for zzzzzz. Traditional ABC books just don't reflect the busy lives of today's toddlers.

Far more useful to learn that A is for Allergy, B is for Babyccino, and C is for Controlled Crying.

All the pain and joy of modern parenting is packed into this delightfully silly, beautifully illustrated ABC.

From Active Birthing through to Zumba, H is for Hummus is a refreshingly honest read for fans of Go the F**k to Sleep and The Middle Class ABC, as well as sleep-deprived parents everywhere.

Joel Rickett is a publisher and a (very) occasional writer. His previous books include How To Avoid Huge Ships and Whitstable Mum in Custard Shortage. He lives in North London (of course), where he's a thoroughly modern parent to two gorgeous, demanding girls.

Spencer Wilson is an illustrator and co-founder of the design and animation company Peepshow Collective. He has been working to commission since 1998 in a world of coffee cups and ordered chaos; his work follows this theme with the creation of sketchy ideas and twisted thoughts. He lives in the modern parenting paradise that is Berkhamsted, Hertfordshire, with his wife and two girls who never cease to inspire him. www.spencerwilson.co.uk

The Scarecrow and His Servant

Moomin and the Wishing Star

Dragons Are Not for Sale