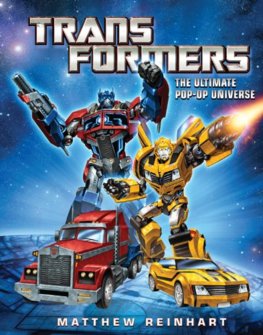 TRANSFORMERS shift, change, and rise to battle in this spectacular interactive pop-up adventure by bestselling paper engineer Matthew Reinhart. Open each page to explore a different part of the vast Transformers universe-then pull the tabs to watch the pop-ups change into entirely new paper creations!

Watch as the planet Cybertron changes into an epic battle on Earth. Then look out for the mighty Autobot Omega Supreme - Reinhart's tallest pop-up ever - as he rises off the page to smash Decepticon foes. In this epic pop-up experience unlike any seen before, only you hold the power to make the Autobots and Decepticons turn from vehicles to robots, and back again.

Here's a book that's truly more than meets the eye!

Tim Burtons The Nightmare Before Christmas: A Petrifying Pop-Up

The World of Warcraft Pop-Up Book

The Worm and the Bird

There’s a Monster in Your Book

Why Can’t I Feel the Earth Spinning