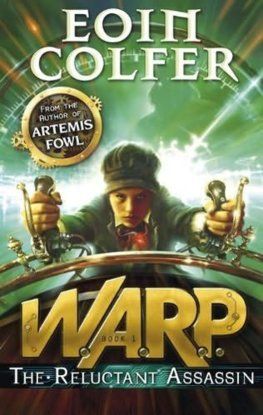 The Matrix meets Oliver Twist, WARP: The Reluctant Assassin is the first of a major new series by Eoin Colfer, the bestselling author of Artemis Fowl.

It all began with the FBI and WARP (Witness Anonymous Relocation Programme). Hiding witnesses in the past to protect the future - until now . . .

Riley is a Victorian orphan, hurtled into the twenty-first century and on the run from his evil master . . .

Albert Garrick, the terrifying assassin-for-hire pursuing Riley through time, along with . . .

Chevie Savano, the FBI's youngest and most impulsive special agent.

As Garrick relentlessly hunts them down, Riley and Chevie face a desperate race to stay alive and stop Garrick from returning to his own time - armed with knowledge and power that could change the world forever.

Colfer has the ability to make you laugh twice over: first in sheer subversive joy at the inventiveness of the writing, and again at the energy of the humour - Sunday Times

Readers mourning the end of the Artemis Fowl series can take heart: this first book in the time-bending WARP series is an all-out blast. - Publishers Weekly

Eoin Colfer is the megaselling author of the Artemis Fowl series, Half Moon Investigations, The Supernaturalist, Airman and The Legend of . . . books. His brilliant new series WARP is out now. Eoin lives with his family in Ireland. www.eoincolfer.com

The Fowl Twins 2: Deny All Charges

Artemis Fowl and the Lost Colony

My First Word Book About Things that go