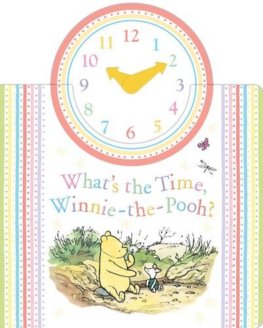 Tick, tock! It's 6 o'clock. Pooh looks at his honey and sighs. 'There's just enough time for a snack before I close my eyes.'

Learn to tell the time with Winnie-the-Pooh!

Join Winnie-the-Pooh on a very busy day, turning the hands of the clock as you go! Pooh Bear's day begins when Christopher Robin brings him downstairs. Then there is plenty of time for eating and playing for Pooh and his forest friends, till finally it is bed time.

This beautifully illustrated novelty book is designed to help children learn to tell the time through following Pooh's day. Join Pooh and all your favourite A. A. Milne characters from the Hundred Acre Woods!

Also look out for:

The nation’s favourite teddy bear has been delighting generations of children for 90 years.

Milne’s classic children’s stories – featuring Tigger, Piglet, Eeyore, Christopher Robin and, of course, Pooh himself – are both heart-warming and funny, teaching lessons of friendship and reflecting the power of a child’s imagination like no other story before or since.

Pooh ranks alongside other beloved characters such as Paddington Bear, and Peter Rabbit as an essential part of our literary heritage. Whether you’re 5 or 55, Pooh is the bear for all ages.

Bodies From The Library

The Mouse Who Ate the Moon