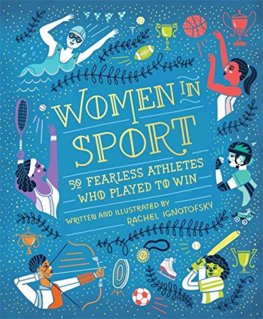 Women in Sport: Fifty Fearless Athletes Who Played to Win

Women in Sport celebrates the success of the tough, bold and fearless women who paved the way for today's athletes. The sportswomen featured include well-known figures like tennis player Serena Williams and broadcaster Clare Balding, as well as lesser-known pioneers like Gertrude Ederle, the first woman to swim the English Channel, and Keiko Fukuda, the highest-ranked female judoka in history.

From the creator of the bestselling Women in Science, this richly illustrated book highlights the achievements and stories of fifty notable sportswomen from the 1800s to today, including trailblazers, Olympians and record-breakers in more than forty sports. It also contains infographics on topics such as muscle anatomy, pay and media statistics for female athletes, and influential women's teams.

Around the World with the Ingreedies

100 Things to Know About Food