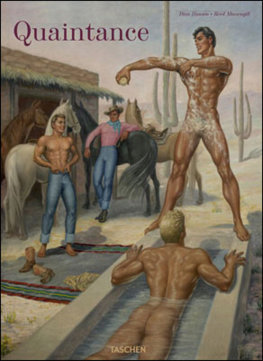 George Quaintance was an artist ahead of his time, a man who forged several successful careers, yet never enjoyed mainstream fame. Had he been born a few decades later, we might know him today as a multi-tasking celebrity stylist, as a coach on Dancing with the Stars, or perhaps as the fine artist he aspired to be.

Half a century on, the masculine fantasy world created by Quaintance, populated by Latin lovers, lusty cowboys and chiseled ranch hands, retains its seductive allure. His highly prized paintings—numbering just 55—rarely come to auction, instead selling privately for undisclosed sums. As the preeminent 'male physique' artist of the 1940s and early '50s, his work for Physique Pictorial, Demi-Gods and Body Beautiful inspired a generation of artists like Tom of Finland, Harry Bush, Etienne, and other, lesser stars in their constellation.

Raised on a farm in rural Virginia, Quaintance traveled a fascinating path of reinvention: at various points in his life he was a Vaudeville dancer, the favored portraitist of Washington's smart set, and a celebrity hair designer—though he never actually touched hair.

TASCHEN's Quaintance traces his remarkable life story and reintroduces his colorful, kitschy and culturally resonant paintings—works that made George Quaintance the most popular and successful physique artist of his time, and one of its most intriguing figures.