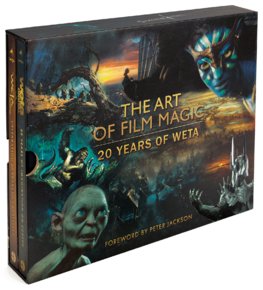 This deluxe slipcased two-volume set is an insider’s tour of twenty years of movie-making magic at Weta Workshop and Weta Digital, the creative team behind such celebrated films as The Lord of the Rings, Avatar, The Avengers, King Kong and District 9.

Brimming with never-before-published content, including concept designs, sketches, behind-the-scenes photographs, and interview material from cast and crew members, it is a stunning look at how the sets, costumes, creatures and characters, weaponry, and visual effects are created for the world’s most iconic films.

A talented director with the right cinematography crew may see in his or her head exactly the movie he wants to make. But to realize that vision he must have the right sets, costumes, characters, weapons, vehicles, and visual effects. These are exactly what the geniuses at Weta Workshop and Weta Digital provide. Based in Wellington, New Zealand, these two companies, partially owned by Peter Jackson, have provided the creative support for some of the most ground-breaking and acclaimed movies of all time.

Such movies include:
The Lord of the Rings trilogy
Avatar
The Hobbit trilogy
Avengers Assemble
Prometheus
District 9
The Adventures of Tintin
King Kong
The Chronicles of Narnia
Rise of the Planet of the Apes
Elysium