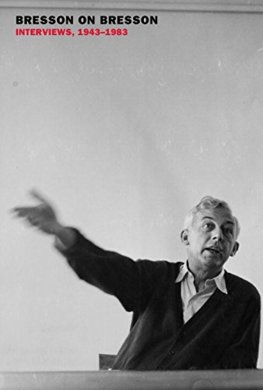 One of the most influential directors in the history of French cinema, Robert Bresson never strayed from his iconoclastic ways, insisting on the use of nonprofessional actors, shunning the advances of Cinerama and CinemaScope (and the work of most of his predecessors and peers), mincing no words about the damaging influence of capitalism and the studio system on the still-developing in his view art of film. Organized chronologically, this collection of interviews and testimonials reveals the development of Bresson s thought over the course of forty years, punctuated by recurring mantras such as Sound cinema invented silence, Characters don t make a film; a film makes its characters, Cinema is a form of writing, and (paraphrased from the Bible) Every idle word shall be counted. His integrity and originality earned him the respect of younger innovators, notably the filmmakers of the French New Wave, whose importance he recognized from the start. Perhaps the most striking cumulative effect of this palimpsest of self-interpretation is the revelation, beneath the apparently hyper-controlled aesthetic of Bresson s films, of a near-religious belief in the value of intuition, not only that of the creator but that of the general public, which he claims to deeply respect: People are always ready to feel before they understand. And that s how it should be. "