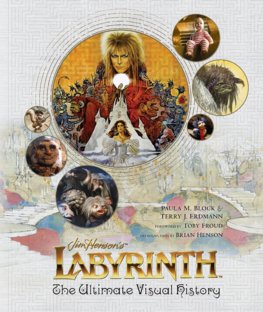 "Labyrinth: The Ultimate Visual History" is the definitive thirtieth-anniversary exploration of the beloved Jim Henson classic, featuring rare artwork, interviews, and on-set photos. Three decades after its release, "Labyrinth," starring Jennifer Connelly and David Bowie, continues to enthrall audiences with its winning mixture of fairy tale whimsy, fantastical creatures, and unforgettable music. Filled with a wealth of rare and unseen behind-the-scenes imagery, "Labyrinth: The Ultimate Visual History" explores the creation of the film as seen through the eyes of the artists, costume designers, and creature creators who gave the beloved fantasy classic its distinctive look. Featuring in-depth interviews with the talented crew and cast, this deluxe book brings together a wealth of rare sketches and concept art with numerous insert items, such as story notes from Jim Henson, sketches from character designer Brian Froud, and many more treats for fans of the film. With stunning visuals and unparalleled insight into the creation of a true modern classic, "Labyrinth: The Ultimate Visual History "is the perfect companion piece to one of the best-loved fantasy films of all time."

Hobbit: the Battle of the Five Armies - Chronicles : Art & Design