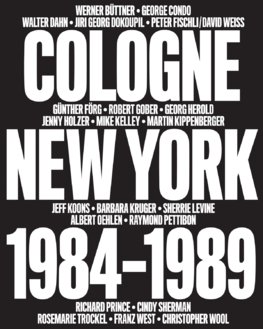 This seminal publication examines the latter half of the 1980s through the lens of international art scenes based at the time in Cologne arguably the European centre of the contemporary art world and New York. From breakout exhibitions of local artists at established Cologne spaces such as Karsten Greve, Paul Maenz, Rolf Ricke, Michael Werner and Rudolf Zwirner, to their embrace in newer galleries, the 80s marked a pronounced upswing in the concentration of international attention afforded to artists associated with the Cologne art scene. The obsession was mirrored in New York, where major shows came to roost at such significant venues as Barbara Gladstone, Metro Pictures and Luhring Augustine. . Important museum exhibitions that explored work being produced and exhibited on both sides of the Atlantic Europa/Amerika at Colognes Museum Ludwig, 1986; and A Distanced View: One Aspect of Recent Art from Belgium, France, Germany, and Holland, at New Yorks New Museum in 1986, to name two also set the tone for this ongoing dialogue. Big, bold and vibrant, this Pentagram-designed publication revives the conversation, reproducing in full colour every one of the over 100 immensely varied artworks by 22 international artists included in this massive exhibition one of the largest in David Zwirners history, showing simultaneously at both the 19th Street and 20th Street spaces. Beyond its stunning visual component, the book features crucial new scholarship by Diedrich Diederichsen and Bob Nickas; an illustrated timeline for both cities; and a range of interviews with curators, artists and gallerists. It also includes an arsenal of compelling archival material, from documentary photographs from the period and reproductions of Colognes historic Spex Magazine, to reviews of exhibitions from the period that demonstrate the development of critical reception. Taken as a whole, this massively ambitious exhibition catalogue encapsulates the energy and heart embodied by this fascinating and fecund moment in global art history.

The Many Lives of Erik Kessels