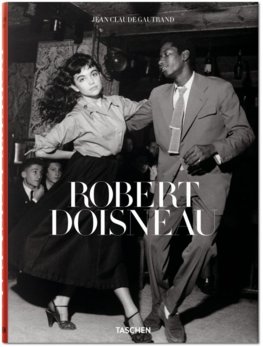 Jean Claude Gautrand
54,95 €
Momentálne nedostupné
As sensitive to human suffering as to the simple pleasures of life, Robert Doisneau is one of the most celebrated exponents of the Photographie humanistethat swept through the 1950s. Cherished in particular for his soulful portraits of Paris, Doisneau demonstrated a unique ability to find – and perfectly frame –charismatic characters, entertaining episodes and fleeting moments of humor and affection.

A summation of a spectacular career, this is the most extensive Doisneau collection ever published, including all his best loved images alongside many lesser-known compositions which equally rejoice in “the ordinary gestures of ordinary people in ordinary situations.” The many quotations from the photographer throughout the volume immerse the reader in Doisneau’s thoughts and give verbal expression to the sensitivity, warmth, and wit which characterize his pictures.

Through more than 400 images, we are transported to the grim suburbs of Doisneau’s youth; through the world of manual labor whose nobility he so admired; and to the studios of the many groundbreaking artists that Doisneau captured in moments of reflection and creativity. A number of color shots of Palm Springs and the transformed suburbs of Doisneau’s childhood reveal a different, more critical, eye to the master photographer.

For this new monograph on all aspects of the life and oeuvre of Robert Doisneau, his long-time friend and TASCHEN author Jean Claude Gautrand had unlimited access to the extensive photo archive Atelier Robert Doisneau. The preface is by Doisneau’s daughters Francine Deroudille and Annette Doisneau.
The author:
Jean Claude Gautrand, born in 1932, is one of France’s most distinguished experts on photography. An active photographer since 1960, he has also made a name for himself as a historian, journalist and critic, with numerous publications. He is the author of the TASCHEN books Paris mon amour (1999), Robert Doisneau (2003), Brassaï (2004), Willy Ronis (2005) and Paris, Portrait of a City(2011).

Portrait of a City. Paris

Paris Portrait of a City

Paris Portrait of the City

Seen Behind the Scene