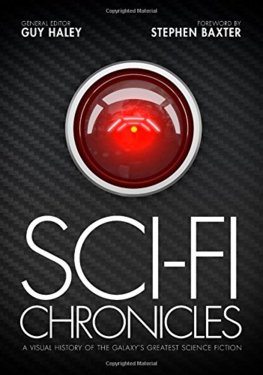 The ultimate guide to the infinite variety of the science fiction multiverse.

What links Stingray to Space: 1999? Which superstar director had a hand in *batteries not included? Who was Pierre Boulle and how did he spawn one of Hollywood’s greatest franchises? All the answers, and much more, are revealed in Sci-Fi Chronicles.

From Barbarella to Blade Runner, this comprehensive guide to science fiction explores the creation and evolution of the genre's greatest creations, detailing their complex real-world and in-world development through an arresting blend of incisive commentary and stunning archive imagery.

Arranged alphabetically, each entry examines the myriad expressions of a much-loved sci-fi title — from book to movie to television series, and beyond. Expert writers offer entertaining overviews, and colour-coded infographic timelines provide an at-a-glance guide to landmark publication, release and broadcast dates.

For key franchises — such as Doctor Who and The War of the Worlds — lavish photo-spreads reveal how they have evolved from their black-and-white beginnings to today's big-budget blockbusters. And seminal, genre-defining sagas, like Star Wars and Star Trek, are accompanied by fascinating chronologies of how each work fits into the series’ fictional universe.

International in scope and encylopedic in scale, Sci-Fi Chronicles is an essential work for any true science fiction fan.

Fantastic Beasts: The Secrets of Dumbledore - The Complete Screenplay

Woke Up This Morning