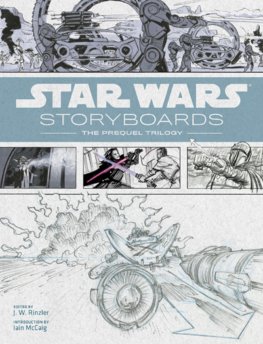 In 1997, as George Lucas worked to complete the script for what would become Star Wars Episode I: The Phantom Menace, he enlisted the talents of some of the greatest storyboard artists of the modern era; Peter Chang, Benton Jew, Jay Shuster, Ian McCaig, Ryan Kaful, Terryl Whitlatch and Ed Natividad, to complete conceptual storyboards that would inform the development of the final shooting script, as well as the finished film. Working from Lucas's ideas for scenes and sequences, these artists produced beautiful drawings that helped lay the foundations for the worlds, characters, shots and sequences of the Star Wars Prequel Trilogy. For Episode II: Attack of the Clones and Episode III: Revenge of the Sith, Lucas again turned to this approach, working with conceptual storyboard artists Warren Drummond, Kirk Henderson, and Ian McCaig (Episode II), and Iain McCaig and Derrick Thompson (Episode III) during preproduction to tease out story germs and inspire the screenwriting process. Together, these conceptual storyboards show early takes on favorite scenes, alternate, unused approaches to character designs and environments and entirely different approaches to key moments; more than 80 percent of these storyboards offer an intriguing "what if?" view on alternate directions the Prequel Trilogy could have taken; like silent comic books, they have an energy and rhythm all their own that is fascinating to explore. Now, for the first time, Lucasfilm has opened its archives to present the complete conceptual storyboards for Episodes I, II, and III. Starting with Episode I, Star Wars Storyboards: The Prequel Trilogy collects the conceptual storyboards for all three films together in one striking volume, along with relevant excerpts from early drafts and shooting scripts, to provide context for these pre-visual guides which are, in their own right, stunning, action-and-adventure-packed images.