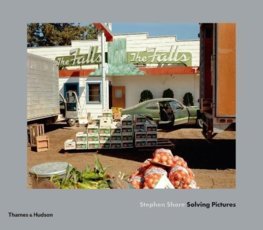 One of the most significant photographers of our time, Stephen Shore has often been considered alongside other artists who rose to prominence in the 1970s by capturing the mundane aspects of American popular culture in straightforward, unglamorous images. But Shore has worked with many forms of photography, switching from cheap automatic cameras to large-format cameras in the 1970s, pioneering the use of colour before returning to black and white in the 1990s, and in the 2000s taking up the opportunities of digital photography, digital printing and social media.

Stephen Shore encompasses the entirety of the artist’s work of the last five decades, during which he has conducted a continual, restless interrogation of image making, from the gelatin silver prints he made as a teenager to his current engagement with digital platforms. Published to accompany the major exhibition at The Museum of Modern Art, New York, the book allows for a fuller understanding of Shore’s work, and demonstrates his singular vision – defined by an interest in daily life, a taste for serial and often systematic approaches, a strong intellectual underpinning, a restrained style, sly humour and visual casualness – and uncompromising pursuit of photography’s possibilities.

Being Modern: MoMA in Paris

How to Read a Photograph