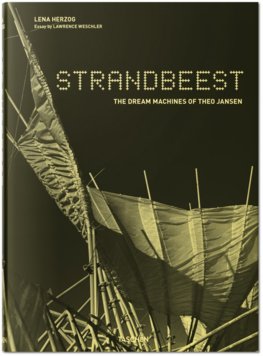 Lena Herzog, Theo Jansen, Lawrence Weschler
43,95 €
Na sklade
For the past seven years, photographer and artist Lena Herzog has followed the evolution of a new, kinetic species. Intricate as insects, but with bursts of equine energy, the "Strandbeests" or "beach creatures," are the creation of Dutch artistTheo Jansen, who has been working for nearly two decades to develop a new life-form that moves, and even survives, on its own.

Set to roam the beaches of Holland, the Strandbeests pick up the wind in their gossamer wings and spring, as if by metamorphosis, into action. As if it were blood, not the breeze, running through their delicate forms, they quiver, cavort, and trot against the sun and sea, pausing to change direction if they sense loose sand or water that might destabilize their movement.

Coinciding with a travelling exhibition, Herzog's photographic tribute captures Jansen's menagerie in a meditative black and white, showcasing Jansen'simaginative vision, as well as the compelling intersection of animate and inanimate in his creatures. The result is a work of art in its own right and a mesmerizing encounter not only with a very surrealist brand of marvelous, but also with whole new ideas of existence.
The author and photographer:
Born and raised in Russia’s Urals, Lena Herzog studied languages and literature at St. Petersburg University, before emigrating to the United States in 1990 where she studied philosophy. She began taking pictures in 1997, and has since authored the photography books Tauromaquia, Flamenco, Pilgrims, and Lost Souls. Her work has been published in The New York Times, Harper’s Magazine, The New Yorker, The Paris Review, and Vanity Fair and exhibited in Europe and the United States.

The artist:
Dutch visual artist Theo Jansen studied science at the University of Delft. He spent his early career painting, before deciding to strike out on a new course by making a real flying saucer which flew over Delft in 1980. Since then he has been working on the creation of the Strandbeest species. Jansen’s work has been featured in several television programs, as well as in The New Yorker, New Scientist, and Wired.

The contributing author:
Lawrence Weschler is Director Emeritus of the New York Institute for the Humanities at NYU. A former staff writer at The New Yorker, he is the author of over 15 books, including the Pulitzer-nominated Mr Wilson's Cabinet of Wonderand Everything That Rises: A Book of Convergences, winner of the 2007 National Book Critics Circle Award for Criticism. He is a contributing editor at Threepenny Review, The Virginia Quarterly Review, and McSweeney's.

Walk With Me New York