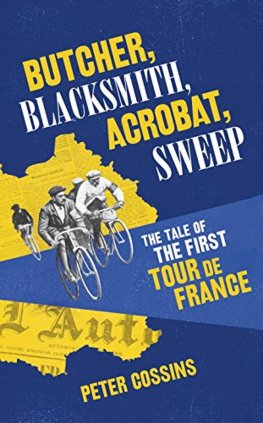 Full of adventure, mishaps and audacious attempts at cheating, the first Tour de France in 1903 was a colourful affair. Its riders included characters like Maurice Garin, an Italian-born Frenchman, said to have been swapped for a round of cheese by his parents in order to smuggle him into France to clean chimneys as a teenager, Hippolyte Aucouturier with his trademark handlebar moustache, and amateurs like Jean Dargassies, a blacksmith who had never raced before.

Dreamed up to revive struggling newspaper L'Auto, cyclists of the time were wary of this 'heroic' race on roads more suited to hooves than wheels, riding hefty fixed-gear bikes for three full weeks. 'With a few francs you could win 3,000', the paper declared in desperation, eventually attracting a field comprising a handful of the era's professional racers and, among other hopefuls, a butcher, painter and decorator, and a circus acrobat.

Would this ramshackle pack of cyclists draw crowds to throng France's rutted roads and cheer the first Tour heroes? Surprisingly it did, and, all thanks to a marketing ruse, cycling would never be the same again. Peter Cossins takes us through the inaugural Tour de France, painting a nuanced portrait of France in the early 1900s, to see where the greatest sporting event of all began.

A History of Cycling in 100 Objects

Paint with the Impressionists

The Joy of Less