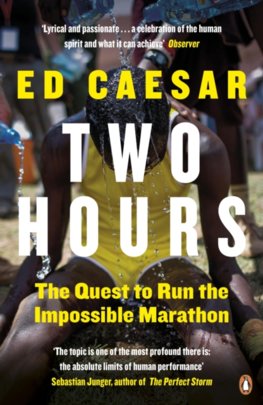 WINNER OF THE CROSS SPORTS BOOK AWARD FOR NEW WRITER OF THE YEAR 2016Two Hours by Ed Caesar - the quest to run the impossible marathon, by the acclaimed writer with inside access to Nike's #Breaking2 project'The marathon tethers runners to their own personal narratives. It is a question of how you grow. Nothing but your own body will sustain you; everything you have done in your life until the moment you cross the finishing line is connected to the effort'Two hours, to cover 26 miles and 385 yards.

It is running's Everest, a feat once seen as impossible for the human body. But now we can glimpse the mountain-top. The sub-two hour marathon will require an exceptional feat of speed, mental strength and endurance.

The pioneer will have to endure more, live braver, plan better, and be luckier than his forbearers. So who is he?In this spellbinding book, Ed Caesar takes us into the world of the elite of the elite: the greatest marathoners on earth. Through the stories of these rich characters, and their troubled lives, he traces the history of the marathon as well as the science, physiology and psychology involved in running so fast, for so long.

And he shows us why this most democratic of races retains its savage, enthralling appeal - why we are drawn to test ourselves to the limit. 'Ed Caesar's treatment of the near-mythical two-hour marathon is both implacably scientific and wonderfully reverential. As a former marathoner I deeply appreciate both.

The prose hums along effortlessly and the topic is one of the most profound there is: the absolute limits of human performance. Reading a book that combines those two things is one of the great pleasures in life'Sebastian Junger, author of The Perfect Storm'I didn't think any book could make me interested in marathon running. Two Hours did that and much more.

Ed Caesar's in depth reporting explores one of sport's ultimate questions: is there a final human boundary and, if so, where? A terrific book: elegant, engaging and rewarding' Ed Smith, former England cricketer and author of Luck

The Moth and the Mountain

Superbetter: How A Gameful Life Can Make You Stronger, Happier, Braver And More Resilient