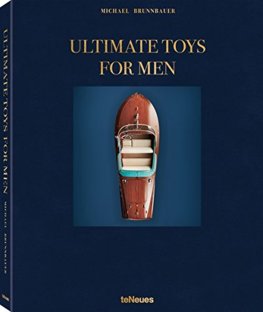 From the Italian luxury sports car to the Swiss chronograph—the ultimate collection of the best, most exclusive, and most luxurious toys for men

With a special section on bespoke production

An opulent photo book that opens up a world full of luxury, pleasure, and aesthetic beauty to the reader

The perfect gift for all boys who have grown up,but preserved their inner child

There are only two notable differences between toys for little boys and toys for grown-up boys: the toys get bigger with age—and more expensive. Matchbox cars give way to high-end sports cars, model boats become motorboats and sailing yachts, and the plastic wristwatch turns into a Swiss chronograph with a perpetual calendar and minute repeater. The Toys for Men series has always stayed abreast of this male drive to play; in the latest volume, we present the ultimate wish list, a selection of the most exclusive, most innovative, and most luxurious toys that men with money can buy. Of course, the list includes the classic male fantasies of Lear jets, mega-
yachts, and super sports cars—the truly giant and great things that move men in the air, on water, or on land. But it also includes the little gadgets—from headphones and wristwatches to SLR cameras—that make tech-loving men’s hearts beat a little faster. We also include the vices that speak to connoisseurs, like that special bottle of French wine, Scottish whiskey, or Cuban cigars. And last but not least, we include one of the greatest luxuries of all: having a product tailored to you and you alone,
bespoke-style. But we’re not just talking about custom-
tailored suits. Cars, golf clubs, skis, nearly everything
today can be customized to suit your particular tastes. If you’re searching for the ultimate toys for the gentleman who has everything, you’ll hit pay dirt here. Because as philosopher Friedrich Nietzsche already knew, “There is a child hidden in every man: and it wants to play.”

MICHAEL BRUNNBAUERstudied business administration at the European Business School (EBS) in Oestrich-Winkel and journalism at the German Journalist School (DJS). He worked for the daily newspaper Financial Times Deutschland (FTD) and Gentlemen’s Quarterly (GQ) until he became editor-in-chief of men’s magazine, Provocateur, which he co-founded. He is also a freelance writer for magazines and newspapers including Robb Report, Weltwoche and Wired. He writes primarily about cars, watches, consumer electronics, interiors, and design. He lives and works in Munich.

Wedding Book For Every Season

A Tree in the House