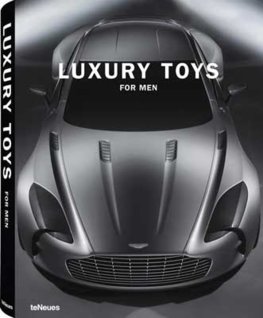 “It’s a man’s world,” sang James Brown in 1966. Honoring this maxim, this book was made for men who relish the finer things in life. It spans everything from neat technological gimmicks and exclusive watches to extraordinarily fast cars, focusing on exactly the type of luxury that makes the “stronger sex’s” heart beat faster.

Thinking the selection shown in this book consists of mere “luxury” items, however, would be doing it an injustice. Instead, the products put together here are all stunning examples of how emotion and finesse can be combined with spectacular aesthetic purity. Seemingly impossible childhood dreams of adventure on air, land and sea suddenly enter the realm of the possible: diving with sharks, heliskiing on slopes covered with virginal powder snow—even flying into space, thanks to multibillionaire Richard Branson, a high achiever in his own right when it comes to making dreamlike luxury adventures possible, and Virgin Galactic. It goes without saying that finesse plays a major role in this book. After all, men are known to have a thing for details and technological know-how in every aspect of life. But even knowing this, the pages that follow will surely go far beyond most men’s expectations: while a running theme of top-of-the-line high-tech luxury might be anticipated, the sheer grandeur that characterizes many of the products shown here is something that defies the boundaries of imagination.The selection includes, for instance, a number of inimitable timepieces created by the world’s leading watchmakers. These watches combine the incomparable aesthetic elegance of their exterior with technical precision and utmost exclusivity, standing as proof of their owners’ true connoisseurship. Meanwhile, several mega and super yachts leave a lasting impression all of their own with unmatched flair and state-of-the-art technology. The WHY super yacht, designed by yacht maker Wally together with high fashion house Hèrmes, is a prime example. Equipped with an environmentally-conscious thermal system and large solar panels on its roof areas, this one-of-a-kind ship brings a whole new level of sustainability to the luxury market without skimping on high-end comfort. “You see, man made the cars to take us over the road.” A series of high-speed marvels engineered for the road come up with dynamically powerful designs and sports elegance leading the way: for example Mercedes- Benz’s SLS AMG gull-wing triumph and the Bentley Continental Supersports Convertible. True: speed and power aren’t everything, but a brief look at the technical specifications of these four-wheeled gems is more than enough to capture anyone’s imagination.

The scope of the products shown throughout this volume represents a veritable kaleidoscope of high-end taste: from the Gold Bike (the name says it all) to luxury jets; from handmade belt buckles to private movie theaters.

“And after man has made everything, everything he can. You know that man makes money to buy from other man”. Surely everyone knows that luxury has always come at a hefty price, but there is much more to it than that. In fact, rarity is one of its defining qualities, which is why many highly desirable items are only available in limited editions. This book is intended for luxury enthusiasts who were unable to get their hands on a particular limited-edition piece, as well as for all others looking for inspiration—in essence, it is an open door to the exhilarating world of luxury.

But not just for men.

Your cue, Mr. Brown: “But it wouldn’t be nothing, nothing without a woman.”

Bettane&Desseauves Guide to Wines of France