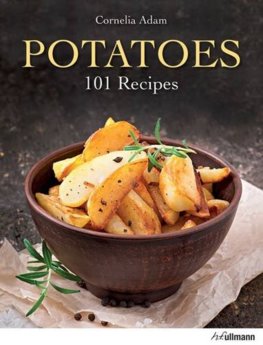 Potatoes are synonymous with simple, inexpensive, and unfailingly delicious food. Since its introduction to Europe in the 16th Century, the humble root vegetable has conquered all continents and is, in many countries, one of best loved of often used ingredients.

The countless ways in which potatoes can be prepared has led to their use in large numbers of national dishes, which are part of each country's heritage and pride. Yet potatoes are more than a banal and basic vegetable. This book takes you from the origins of the tuberous in Peru, where it played an important part in the Inka civilization, to the dinner tables of Europe, where the potato became a staple food for the rich and the poor alike.

This superbly illustrated volume brings together more than 100 delectable recipes from around the world - from soups and salads, to pan-fried and oven baked dishes. It even features potato based desserts, including mouth-watering potato waffles and a sweet potato soufflé! Tips by master chefs on how they create their best potato recipes offer fabulous extra inspiration.