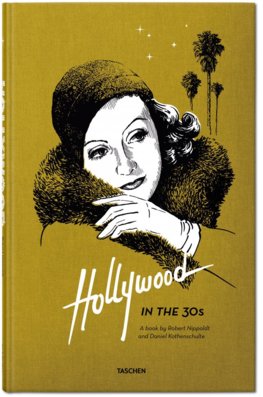 Daniel Kothenschulte, Robert Nippoldt
43,95 €
Na sklade
In the 1930s, the legendary City of Cinema moved from the silent era to the talking picture. It was a decade of pomp and excess in the motion picture capital, of glorious stardom and megalomaniac directors; a time when politicians and the mob all wanted a piece of the thrilling action. It was the age of the Marx brothers,Greta Garbo, Frankenstein, and Gone with the Wind, Charlie Chaplin's bowler hat and moustache, Marlene Dietrich's androgynous glamor, and Jean Harlow's perfectly positioned beauty spot.

In this tribute to Tinseltown's finest age, illustrator Robert Nippoldt and film critic Daniel Kothenschulte team up to pay homage to the creators, characters and charisma that made up this golden era. With his evocative illustration style, previously showcased in TASCHEN's Jazz: New York in the Roaring Twenties,Robert Nippoldt captures the scene with all its seduction, celebrity, and its grit. In the accompanying text, Kothenschulte profiles the movers and shakers of the age, as well as its most groundbreaking developments across movie direction, music, costume, scenery and beyond.

Brimming with elegance and energy, this enchanting journey in images and words takes the reader back in Tinseltown time, direct to the heart, and the sheer movie-making thrill, of a decisive cinematic decade.


Awards for the original German edition:
The author:
Daniel Kothenschulte has written books and numerous articles about film history and visual culture. Beside heading the film department of Frankfurter Rundschau since 2001 he is a devoted silent movie pianist.

The illustrator:
Robert Nippoldt is a German graphic designer, illustrator, and book artist. He is best known for his award-winning books Gangster, Jazz and Hollywood about America in the 1920s and 1930s. His studio is located at the very hip old depot of Muenster.

Vargics Miscellany of Curious Maps: Mapping out the Modern World

Lunch with the FT: A Second Helping

Everyone You Hate is Going to Die