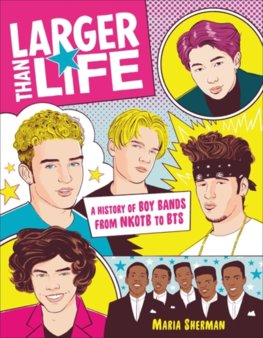 Maria Sherman
A History of Boy Bands from NKOTB to BTS
23,50 €
Momentálne nedostupné

The music, the fans, the choreography, the clothes, the merch, the hysteria... the hair. The pop phenomenon that dominated the 1990s and 2000s has left a long-lasting mark on culture, yet no book has fully celebrated them.

Maria Sherman has a deep love of boy bands and has written extensively on them for Jezebel, where she currently works, as well as in Rolling Stone, Vulture, and more. In this book, her first, she celebrates the boy band revolution with a mix of serious fandom and a tongue-in-cheek attitude. Larger Than Life begins with a brief look at the history of boy bands starting with The Beatles and touching on groups from the 1970s and early 1980s like the Jackson 5 and Menudo.

Sherman then moves on the heart of the book -- the boy bands of the 80s, 90s, 2000s, and 2010s. Bands including NKOTB, Backstreet Boys, *NSYNC, One Direction, and K-Pop bands like BTS are given a capsule biography with spreads on solo careers (the good and the bad), one hit wonders, dating, in-fighting, haters, and more mini-essays interspersed throughout. Informative and funny but never fan-shaming, Larger Than Life is the ultimate nostalgic guide to the musical genre and proof that this once maligned musical genre should no longer be under-appreciated.

Is Technology Making Us Sick