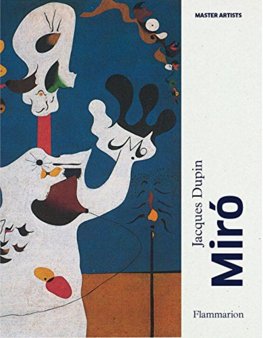 An affordable compact edition of Jacques Dupin’s much-acclaimed critical-biographical study of Joan Miró. Joan Miró was a world-renowned Spanish painter, sculptor, and ceramicist, and a key figure in twentieth century art, born in Barcelona in 1893. He began painting at a very young age: this volume contains images of drawings dating back to 1901, when he was only 8 years old. He studied and worked in Barcelona for most of his youth, but moved to Paris in 1920, drawn by the artistic community that was blossoming in Montparnasse, which is where he met Jacques Dupin. This is an intimate biographical study of Miró, written from a scholarly point of view but by a unique source who personally knew the artist. The author shared many discussions with the painter himself in his studio, and they took trips together around Miró’s native Catalonia to consult his archives. This work is partially a recompilation of the author’s comprehensive study of Miró from 1961, which has been reworked and enriched to include astonishing discoveries made after the artist’s death, such as various projects, sketchpads, texts, and correspondence. Additional chapters have also been added that are devoted to the last years of his life. The volume is organized chronologically and split into chapters that define each era in terms of its ideas, artistic movement, location, or subject matter, which allows for easy navigation of Miró’s thought processes, because each successive period of his life follows on from the previous in a clear and logical fashion. The chronological account of his life is followed by sections on the alternative artistic mediums he used in addition to painting, sculpture, ceramics, monumental art, graphic work, and paintings that depict poetry. Extensive notes, a chronology, bibliography, and a list of Miró’s exhibitions and catalogues complete the work.