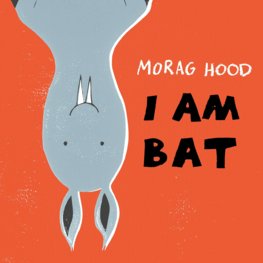 DO NOT STEAL MY CHERRIES.

Bat's cherries keep going missing. One by one, the precious red cherries are whisked away by mischievous animal tricksters behind Bat's back. Bat fruitlessly tries to catch the culprit and rescue those poor cherries - all to no avail. Will the cherries ever be restored to their rightful owner? In the hilarious I Am Bat, super-talent Morag Hood cleverly draws the reader into the story as Bat attempts to track down the guilty cherry thief and everyone's a suspect - including YOU!

This bold, colourful and very funny book, stunningly printed with eye-poppingly bright pantone inks is an instant winner with children and adults alike, and the adorably petulant and over-protective Bat is an irresistible character destined to be loved by all.

Brenda Is a Sheep

Wild in the Streets : 20 Poems of City Animals

100 things to know about History

100 Things to Know About Food