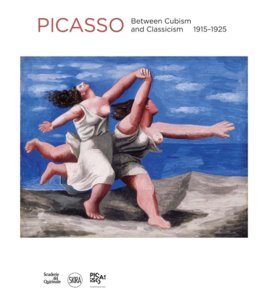 One hundred years later, this book evokes Picasso’s journey to Rome and Naples with Jean Cocteau, Igor Stravinsky and the company of Sergei Djagilev’s Ballet Russes . lt was during this trip that he met and fell in love with the company’s leading dancer, Olga Khokhlova, who would become his first wife. In addition to the few extraordinary weeks spent in ltaly, which were pivotal in the development of Picasso’s art during the post-war years, the monograph also examines his production immediately after this ltalian experience, with particular reference to the ballets Parade and Pulcinella , as well as those paintings indebted to the iconographic and cultural world that these two works had introduced him to. The book focuses on Picasso’s ability to experiment in different genres, from still-life to portraiture, from the playful and decorative collages executed during the Great War, to the sophisticated realism of the years of his association with Djagilev. It also documents the long-term impact of his ltalian journey on Picasso’s art, which necessarily involves the study of some of the works of Classical inspiration executed in later years. With over 100 works including iconic paintings, drawings and photographs, the book shows masterpieces and key works of this period of Picasso’s production (1915-1925), with the aim of pointing out hidden links, temporary resurfocings or originai pre existence of Classical elements throughout the artist’s career.