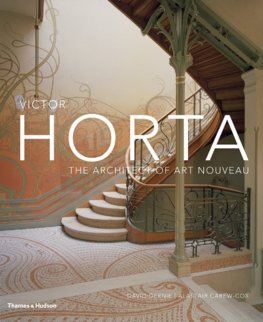 Victor Horta (1861–1947) is well known as the creator of Art Nouveau architecture. Following the design of the Hôtel Tassel, Brussels, in 1893, Horta produced more than 40 buildings during the following decade. This new book discusses the many influences on his designs, and his legacy. Detailed descriptions of 19 projects, including Edicule Lambeaux, Hôtel Autrique, Hôtel Max Hallet and the Brugmann Hospital, are illustrated with Horta’s original drawings and specially commissioned photographs by award-winning architectural photographer Alastair Carew-Cox. Included in this book are extensive photographs of Hôtel Solvay, one of Horta’s most important works; access to photographers had been denied for 20 years, but special access was granted to Alastair Carew-Cox in the summer of 2016 in recognition of his and Professor David Dernie’s significant contribution to the study of Horta.

Victor Horta: The Architect of Art Nouveau has been prepared in close collaboration with the Horta Museum, Brussels, ensuring that it is both accurate and up to date. It will appeal to anyone interested in Art Nouveau, one of the great aesthetic movements of the early 20th century. Its richly ornamental style of fluid lines based on natural forms expressed a desire to abandon the historical styles of the 19th century and to develop a language that was beautifully crafted and thoroughly contemporary, laying the foundations for the development of modernism in architecture and interior design.