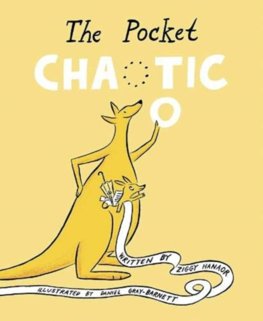 A young kangaroo called Alexander lives in his mum, Nancy's pocket. Alexander loves his mum, but there's one thing she does that really drives him nuts. She is always putting stuff in her pocket.

Alexander tries to keep things neat, but the more he tidies, the more stuff she shoves in there. When he complains, his sister calls him a baby - it's time to leave the pouch anyway. But Alexander loves it in there - it's warm and cosy and smells of mum.

Then one day, it gets really bad. Twelve bobby pins, a tube of toothpaste, a bottle of water, a packet of chewing gum, two bus tickets, some keys, a toy car and a cookbook all find their way into Nancy's pouch. And that's just for starters.

Finally Alexander's had enough. 'I can't take it any more!' he shouts. 'I'm moving out!' So Alexander moves into the room next to his sister's.

They make it all cosy, with a furry blanket and shelves for all his stuff. So it's just like his mum's pouch. Almost.

The penultimate spread is Alexander sleeping with all his stuff strewn around him. The final spread is Nancy clearing out her pocket with a wink. It was time for Alexander to go.

This is a heartwarming tale about a connection between a son and mother and a journey towards independence, beautifully brought to life.

Plastic Sucks! You Can Make A Difference

A Year in Nature