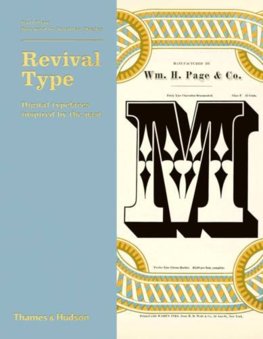 Revival Type is a collection of contemporary digital fonts with origins in the past. Examples include direct revivals of metal and wood typefaces, while others are looser interpretations of older typefaces. Among the fonts are interpretations of classic designs by Nicolas Jenson, Claude Garamont, Robert Granjon, William Caslon, John Baskerville, Giambattista Bodoni, Firmin Didot and other iconic names. Alongside them are typefaces rooted in the work of important, though lesser known, names such as Eudald Pradell, Philippe Grandjean and Richard Austin. Finally, there are updates and revisions of 20th-century classics like Palatino, Meridien, DIN, Metro and Neue Haas Grotesk (the original name of Helvetica). Some designs are not revivals of typefaces but of letterforms, from inscriptions to calligraphic manuals to letters in posters and bookjackets. Some revivals are aesthetic extensions of 20th-century typefaces that have been updated technologically. Others are actually reinterpretations or variations on typefaces from the past necessitated by having to make types that function in the 21st century and not in the distant past. Re:Type looks at type ‘revivals’ in this broad manner.