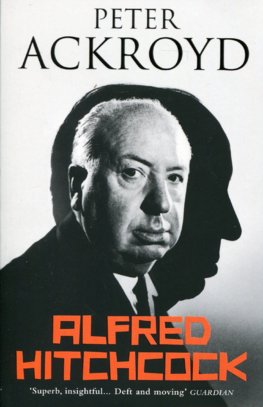 Alfred Hitchcock was a strange child. Fat, lonely, burning with fear and ambition, his childhood was an isolated one, scented with fish from his father's shop. Afraid to leave his bedroom, he would plan great voyages, using railway timetables to plot an exact imaginary route across Europe. So how did this fearful figure become the one of the most respected film directors of the twentieth century?

As an adult, Hitch rigorously controlled the press's portrait of himself, drawing certain carefully selected childhood anecdotes into full focus and blurring all others out. In this quick-witted portrait, Ackroyd reveals something more: a lugubriously jolly man fond of practical jokes, who smashes a once-used tea cup every morning to remind himself of the frailty of life. Iconic film stars make cameo appearances, just as Hitch did in his own films. Grace Kelly, Carey Grant and James Stewart despair of his detached directing style, and, perhaps most famously of all, Tippi Hedren endures cuts and bruises from a real-life fearsome flock of birds.

Alfred Hitchcock wrests the director's chair back from the master of control and discovers what lurks just out of sight, in the corner of the shot.

The Grip of Film

Little Prince The Art of the Movie