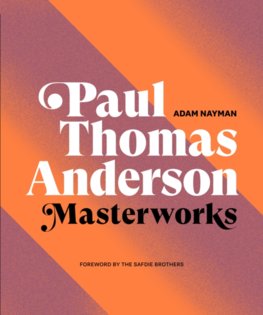 A heavily illustrated mid-career monograph exploring the 30-year creative journey of the 8-time Academy Award-nominated writer and director Paul Thomas Anderson has been described as a true auteur and among the foremost filmmaking talents of his generation. His films have received 25 Academy Award nominations, and he has worked closely with the finest actors of our time, including Daniel Day-Lewis, Joaquin Phoenix, and Philip Seymour Hoffman. In Paul Thomas Anderson: Masterworks, Anderson's entire oeuvre-from Boogie Nights (1997), There Will Be Blood (2007), and The Master (2012) to his music videos for Radiohead to his early short films-is examined in illustrated detail for the first time.

Anderson's influences, his style, and the recurring themes of reinvention, alienation, destiny, and ambition that course through his movies are analyzed and supplemented by firsthand interviews with Anderson's closest collaborators and illuminated by film stills, archival photos, original illustrations, and a vibrant, engaging design aesthetic. Masterworks is a tribute to the dreamers, drifters, and evil dentists who populate his world.

The Coen Brothers: This Book Really Ties the Films Together