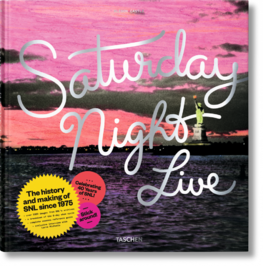 Alison Castle
49,95 €
Momentálne nedostupné
On October 11, 1975 at 11:30 p.m., NBC viewers who tuned in to the network's new late night show saw a sketch featuring John Belushi repeating, in a thick foreign accent, nonsensical phrases about wolverines being read to him by head writer Michael O'Donohue. Abruptly, O'Donohue clutched his heart and collapsed onto the floor. Belushi paused, raised his eyebrow, and then did the same. Posing as the stage manager, Chevy Chase entered the set and feigned confusion before breaking character and announcing to the camera: "Live from New York, it's Saturday Night!"

In that instant, television, which had long been out of touch with the young and hip, experienced the first seismic tremors of a major paradigm shift. TV comedy as we know it today owes it all to Saturday Night Live, the show that dared to take risks(not least the fact that it's broadcast live), challenge the censors, and celebrate the work of offbeat writer-performers. Hundreds of gifted and dedicated people have contributed toSaturday Night Live over the years, and this book pays homage to their groundbreaking work. The list of esteemed alumni, most of whom were complete unknowns when they debuted on SNL, reads like a Who's Who of the past 4 decades in comedy: John Belushi, Dan Aykroyd, Gilda Radner, Chevy Chase, Bill Murray, Al Franken, Eddie Murphy, Martin Short, Billy Crystal, Dana Carvey, Phil Hartman, Chris Farley, Mike Myers, Adam Sandler, Conan O'Brien, Chris Rock, Will Ferrell, Tracy Morgan, Jimmy Fallon, Tina Fey, Amy Poehler, Kristin Wiig, Seth Meyers, Fred Armisen, and Bill Hader—to name just a few.

Now, as SNL celebrates its 40th anniversary, TASCHEN brings you the ultimate tribute to the show. To research this book, editor and author Alison Castle was given not only full access to SNL's archives, but also the rare opportunity to watch the cast and crew at work. She spent the better part of season 39 in the trenches, learning how everything comes together in just six days for the live performance. Part encyclopedia and part behind-the-scenes tour, Saturday Night Live: The Book covers both the making of the show and its remarkable history.

Alison Castle received a BA in philosophy from Columbia University and an MA in photography and film from New York University (NYU/International Center of Photography master’s program). She is the editor of titles on photography, film, and design, including Some Like It Hot, The Stanley Kubrick Archives, Linda McCartney: Life in Photographs, and Marc Newson: Works.