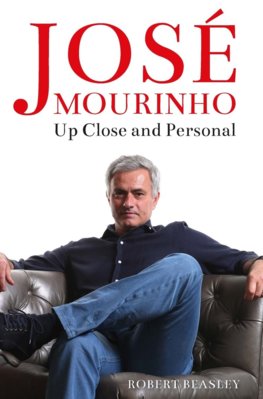 Jose Mourinho: Up Close and Personal

This unique insider account of the private man and public manager begins at Old Trafford in 2004, when Mourinho put himself on the football map as his Porto team knocked Manchester United out of the Champions League. Since then, author Robert Beasley has enjoyed unparalleled access to and unrivalled experiences with Mourinho, both on a professional basis and on a personal level.

Touring alongside Mourinho from his first tenure at Chelsea, Beasley forged a friendship with the manager that has lasted to this day. He reveals how close José came to becoming England's manager, and how hard Tottenham pushed in their attempts to secure him. He discloses the shocking depths of Mourinho's dislike of Arsenal boss Arsène Wenger, and how his relationship with Chelsea owner Roman Abramovich really played out behind the scenes. Then there are all the intriguing stories behind the players he bought, and the ones he desperately wanted but couldn't get.

Written by the one man allowed inside José Mourinho's inner sanctum, this is the fascinating story of Mourinho, the man behind the headlines, and life at some of the world's biggest football clubs.