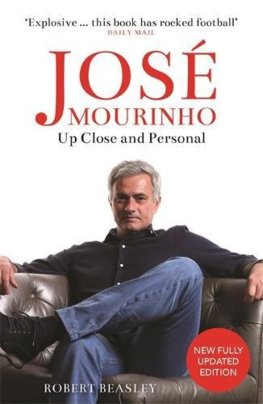 The gripping biography of one of the most successful managers in the game, José Mourinho, giving a rare insight into Mourinho the man as well as Mourinho the manager. Updated to include the full 2016-17 season.

José Mourinho is undoubtedly one of the most charismatic and controversial characters in football today. Never far away from the headlines, it is the drama surrounding him as much as his many successes that make him such a fascinating figure.

Having worked at some of the biggest clubs in the world - Porto, Chelsea, Inter Milan, Real Madrid and Manchester United - Mourinho knows how to deliver when it matters. Leaving trophy cabinets bursting wherever he's been, he has a claim on being the greatest manager in his sport. But is the way he conducts himself on the touchline and in front of the cameras the real José Mourinho, or an act he puts on for the watching world?

Author Robert Beasley has followed Mourinho's career closely since his arrival on the English football scene in 2004. An award-winning sports correspondent, Beasley has been the one person granted privileged access to the Special One's inner sanctum, and he found there a man few ever get to know - let alone get to call a friend.

This is the story of José Mourinho, up close and personal. Delving into the workings of the famed manager's mind, as well as the backroom antics and transfer sagas at the game's greatest clubs, we see the world from José's point of view. Revealing the untold stories behind how close Mourinho came to getting the England and Tottenham jobs and his sometimes tumultuous relationships with the likes of Roman Abramovich, Rafael Benítez and Arsenal boss Arsène Wenger, and why he will always put family and friends before football, this is a side to José Mourinho you never thought you'd see.

Jose Mourinho: Up Close and Personal

Fix Your Bike : Repairs and Maintenance for Happy Cycling

The Infographic book of tennis

Decorating with Pompoms and Tassels