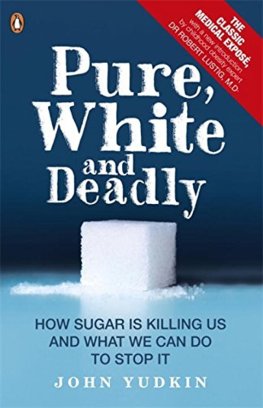 Pure, White and Deadly : How Sugar is Killing Us and What We Can Do to Stop it

A Telegraph Top 10 Diet Book, Pure White and Deadly by John Yudkin is a must-read for those concerned with how much sugar we consume every day.

Sugar. It's killing us. Why do we eat so much of it? What are its hidden dangers?

In 1972, when British scientist John Yudkin first proved that sugar was bad for our health, he was ignored by the majority of the medical profession and rubbished by the food industry.

We should have heeded his warning.

Today, 1 in 4 adults in the UK are overweight.

There is an epidemic of obese six month olds around the globe.

Using everyday language and a range of scientific evidence, Professor Yudkin explores the ins and out of sugar, from the different types - is brown sugar really better than white? - to how it is hidden inside our everyday foods, and how it is damaging our health.

Brought up-to-date by childhood obesity expert Dr Robert Lustig M.D., his classic exposé on the hidden dangers of sugar is essential reading for anyone interested in their health, the health of their children and the health of modern society.

'[A] valiant . . . attempt to warn us against our lust for sucrose' British Medical Journal

'Arguably the leading nutritionist of his time' Guardian

'Worldwide, around 180million tonnes of refined sugar is produced each year and the UK market alone is worth nearly £1billion. Little wonder that no one listened to eminent nutritionist Professor John Yudkin when he called sugar 'pure, white and deadly' back in 1972 and quite rightly warned of the links between excessive consumption and heart disease' Catherine Collins, Principal Dietician, St George's Hospital

John Yudkin (8 August 1910 - 12 July 1995) was a British physiologist and nutritionist, whose books include This Slimming Business, Eat Well, Slim Well and This Nutrition Business. He became internationally famous with his book Pure, White and Deadly, first published in 1972, and was one of the first scientists to claim that sugar was a major cause of obesity and heart disease.

Robert H. Lustig, M.D. has spent the past sixteen years treating childhood obesity and studying the effects of sugar on the central nervous system and metabolism. He is the Director of the UCSF Weight Assessment for Teen and Child Health Program and also a member of the Obesity Task Force of the Endocrine Society. His YouTube video lecture Sugar: The Bitter Truth has received over two million hits, he recently appeared on the BBC 2 documentary The Men Who Made Us Fatand his book Fat Chance: Beating the Odds Against Sugar, Processed Food, Obesity, and Diseaseis being published in Autumn 2012.

By Hand: The Art of Modern Lettering

Pirates and Pompoms How to Make Childrens Toys and Costumes

Why We Make Things and Why It Matters