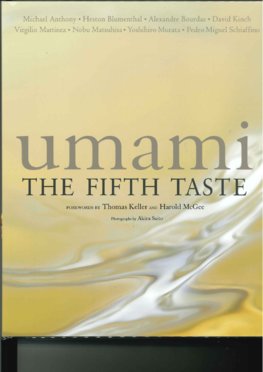 Highly qualified food and nutrition scientists combine with some of the world s greatest chefs to produce this superbly illustrated revelation of the mysterious fifth taste that has gained global recognition in recent years and has become such a key component in cooking. In the words of chef Yoshihiro Murata: Umami is a Japanese word, and the taste was originally identified by a Japanese scientist, but it has been used in cuisines around the world for centuries by people with no knowledge of the word or of dashi, the umami-rich stock used in Japanese cuisine. Examples include Russia s beet stock, made with beets and beef, Britain s Marmite and vegetable soup, and China s shang tang made with Jinhua ham. Chicken breasts, dried tomatoes, and morel mushrooms can also be used to make stock. Now that chefs have learned about umami, they are actively using it in their cuisine, and health-conscious diners have also picked up on this taste, promoting its spread to tables around the world. The ingredients of good food know no borders. But good cooking also requires communication. We Japanese chefs have been picking up hints from the cuisines of other countries, such as China and France. And non-Japanese chefs have been adopting practices from Japan, including the use of dashi and of umami. The world surely has many more umami-rich foodstuffs waiting to be discovered. As a chef, I am eager to try out diverse ingredients. And I am also eager to share Japan s splendid techniques, such as the use of umami and dashi to bring out the best from ingredients of all sorts techniques that can present wonderful new possibilities for cuisines of every genre.

How to Feel the Fear and Eat It Anyway

The Art & Science of Foodpairing