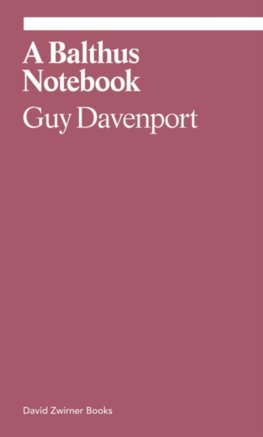 In his 1989 book on Balthus-the storied and controversial artist who worked in Paris throughout the twentieth century-Guy Davenport gives one of the most nuanced, literary, and compelling readings of the work of this master. Reading it today highlights the change in perspectives on sexuality and nudity in art in the past thirty years. Written over several years in his notebooks, Davenport's distinct reflections on Balthus's paintings try to explain why his work is so radical, and why it has so often come under scrutiny for its depiction of girls and women.

Gauguin's naked Polynesian girls, brown and remote, escape the scandal of Balthus's, although a Martian observer would not see the distinction." Davenport's critique helps us understand Balthus in our times-something we need more than ever as we crucially confront sexual politics in visual art.

Of All That Ends

Art in the Making