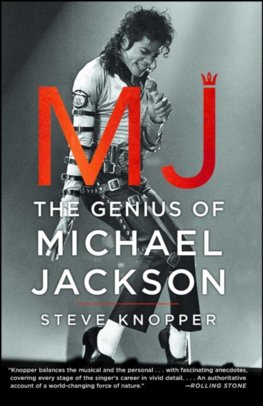 Mj: The Genius of Michael Jackson

The definitive biography of Michael Jackson, a vividgripping...authoritative account of a world-changing force of nature (Rolling Stone), celebrating the King of Pops legendary contributions to music, dance, and popular culture.

From the moment in 1965 when he first stepped on stageat age sevenin Gary, Indiana, Michael Jackson was destined to become the undisputed King of Pop. In a career spanning four decades, Jackson became a global icon, selling over four hundred million albums, earning thirteen Grammy awards, and spinning dance moves that captivated the world. Songs like Billie Jean and Black and White altered our national discussion of race and equality, and Jacksons signature aesthetic, from the single white glove to the moonwalk, defined a generation.

Despite publicized scandals and controversy, Jacksons ultimate legacy will always be his music.

In an account that reminds us why Michael Jackson was, indeed, a genius entertainer (New York Newsday), Rolling Stonecontributing editor Steve Knopper delves deeply into Jacksons music and talent. From the artists early days with the Jackson 5, to his stratospheric success as a solo artist, to Beat It and Thriller, Bad and The Man in the Mirror, to his volatile final years, his attempted comeback, and untimely death, Knopper draws on his critical and reportorial savvy in assessing Jacksons creative peaks and valleys, (USA TODAY) exploring the beguiling and often contradictory forces that fueled Michael Jacksons genius. Drawing on an amazing four hundred interviewsranging from Jacksons relatives, friends, and key record executives to celebrities like will.i.am and Weird Al Yankovicthis critical biography puts his career into perspective and celebrates his triumph in art and music.

This is a thoughtful look at an artist who grew up in a segregated mill town and who, for the rest of his life, made music to bring down walls (Chicago Tribune).

Too Fast to Live Too Young to Die

The Butterfly Effect : How Kendrick Lamar Ignited the Soul of Black America